I joined IT-BHU (now IIT-BHU) in 1979. It was my first time in a hostel. We met so many new faces of nearly same age group. Most of us was worried with uncertainties of facing a new place, new environment and that dreaded feeling of "ragging". With all these tensions around I found one guy was ever smiling. That was Laxmi.

Laxmi was ever helpful. In third year we had computer. It was our first experience in typing on qwerty keyboard. Laxmi knew typing and he helped me to pick up touch typing so that it was easy to interact with computer.

That year we had a rather short winter vacation and I did not go home. Laxmi also did not go home. On Dec 25th we discovered that most hostels are deserted. Life suddenly felt very dull sitting quietly in the deserted campus. We got a brainwave to go to Obra on bike. Fortunately that was not the age of internet, and we did not have many sites to consult and contemplate. The distance of 110 Km looked achievable. We packed our bags, took a bicycle pump for insurance and paddled our way to Obra. We took a decision on spurt of a moment, did not realize that near the end of our journey, we shall have to bike up the hill. There were five of us - Ashish, Sakil, Laxmi, Wahati and me. We faced the challenge but somehow made it to Obra by evening.


The journey was memorable. Biking such long distance and on hilly road had its own thrill. View around was fantastic. What eye saw compensated the pain we had on our legs. We spent couple of days in Obra and then returned on 31st. 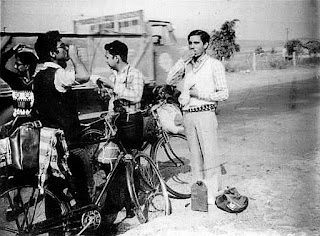 Now after thirty odd years, most of the photographs that we took on the way have gone. Only a few prints remain, but the memories remain fresh.


Later in the next semester both Laxmi and I took Operations Research as electives. There were only a few students in that class. We used to clear each others doubts, in the process we become close friends.  In final year all of us shifted to new hostel. Laxmi was one of the first batch of students to reach hostel that year. He had reserved two rooms beside his for me and Srini, who was also very close friend during my college days. While returning both of them visited my house in Kolkata. That was last we saw.


Laxmi went to do his PhD in USA, I went for my PG in NITIE. During the student days we used to write often. Sometime for some books he wanted to be shipped from India. Some time, when chatting and skype became an option we had long discussion over influence of philosophy over scientific thinking. It was through such discussion I developed an awareness of of duality concept that graeco-roman scientists tend to follow and most of us follow the same line of reasoning unquestioningly and its difference with oriental pluralistic systemic thought process. After his PhD and few years of teaching, Laxmi was bitten by the entrepreneurial bug and floated his first company - OHMS: Optimization & Heuristics Management Solutions Inc. He was very thrilled with the new venture and sent me his visiting card. During Dot-Com boom OHMS did good business by advising new companies on algorithms. As the bubble burst, so did OHMS. Laxmi was very fond of OR and maths. When e-mails became popular and came to India, he was one of the first one to send me an e-mail. His id was orpi@cmil.com; orpi was combination of OR and Pi (representing Maths).


After OHMS, Laxmi floated many companies. Palam was one of the successful one that rode on the outsourcing wave. Palam acted as quality and delivery agent for many Indian companies, in the process it helped quite a few Indian companies to reach out to US market. Laxmi preferred the business model of taking share of company and being on board for the companies he helped to expand in US. Over the years Laxmi became board members in quite a large number of companies. During this time he preferred to be called as Narsi, which was short of his family name. Thus S Laxmi Narasimhan metamorphosed into Narsi. 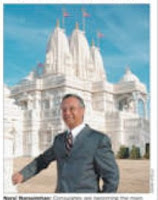 During this time I also saw him develop a strong passion for community work. He was very passionate about the Swaminarayan Temple of Atlanta and loved to accompany visiting Indian celebrities. He used to be a shy person during his student days, but we saw him change to a heavily networked person and become founder of Indian Professionals Network (IPN). Whatever Narsi did, he will drop in a link or share the news clip. Like his getting elected as  chairman of the Georgia Indo-American Chamber of Commerce or his photo being published in local newspaper.  Narsi was a co-traveller who took the road I did not take but we had a bridge ("palam" in Tamil as he explained it to me) that remained between us.  But then Narsi crossed a bridge that has no return path. A directed graph as Narsi would probably have like to call it. On 2nd May, 2016 I was in Pune. I was not reading the mails regularly. Suddenly I got a mail with this shocking news that Narsi has passed away after a massive heart attack on Apr, 29th in his apartment. This is a news that took a long time to register and will take a long time to digest. We will all cross the bridge that Narsi crossed at some point in time but this time he could not share the news.  This news brings association to a song that keeps buzzing in my head, let me share it with you all --

Email ThisBlogThis!Share to TwitterShare to FacebookShare to Pinterest
Labels: BHU, My Life

Today in the news feed I saw a news that I thought I shall dwell a bit. The news was about a new venture setup by two friends Ankit Agrawal and Karan Rastogi. They are from a place that is pretty close to my heart -- Kanpur.  The city is one of the typical polluted industrial city that has grownup organically without much planning. But what these guys did is commendable. 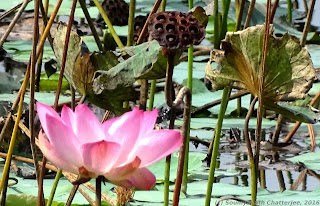 These friends realized that our religious minded people do not like to dump flowers in garbage. They would dispose these flowers in river. The flowers, approximately 80, 00,000 tons  that gets dumped in rivers cause enormous pollution. They have setup a venture to collect these flowers and use vermi-culture to convert it into good organic fertilizer.

It is a novel idea, but I would say it is also a waste of sorts. Flower has many things that we value - smell and color are two most visible thing in flower. Dried and grounded flower powder is often used as gulal that we use during holi. Essential oil from flower can be extracted by many different methods, like:


More details about it can be found in Nan Martin's blog.

As we have a huge stock of flower, extracting this oil could lead to substantial increase in our GDP. After extracting the oil we may use the flower for making organic dye, that can be used in our textile and other cottage industries, part of it can also be used to make organic gulal. Only after we have actually extracted the usable parts, we should feed the rest to worms. Worms do not need the perfume and color, we do.

Recycling is good but making full use of the potential is better.